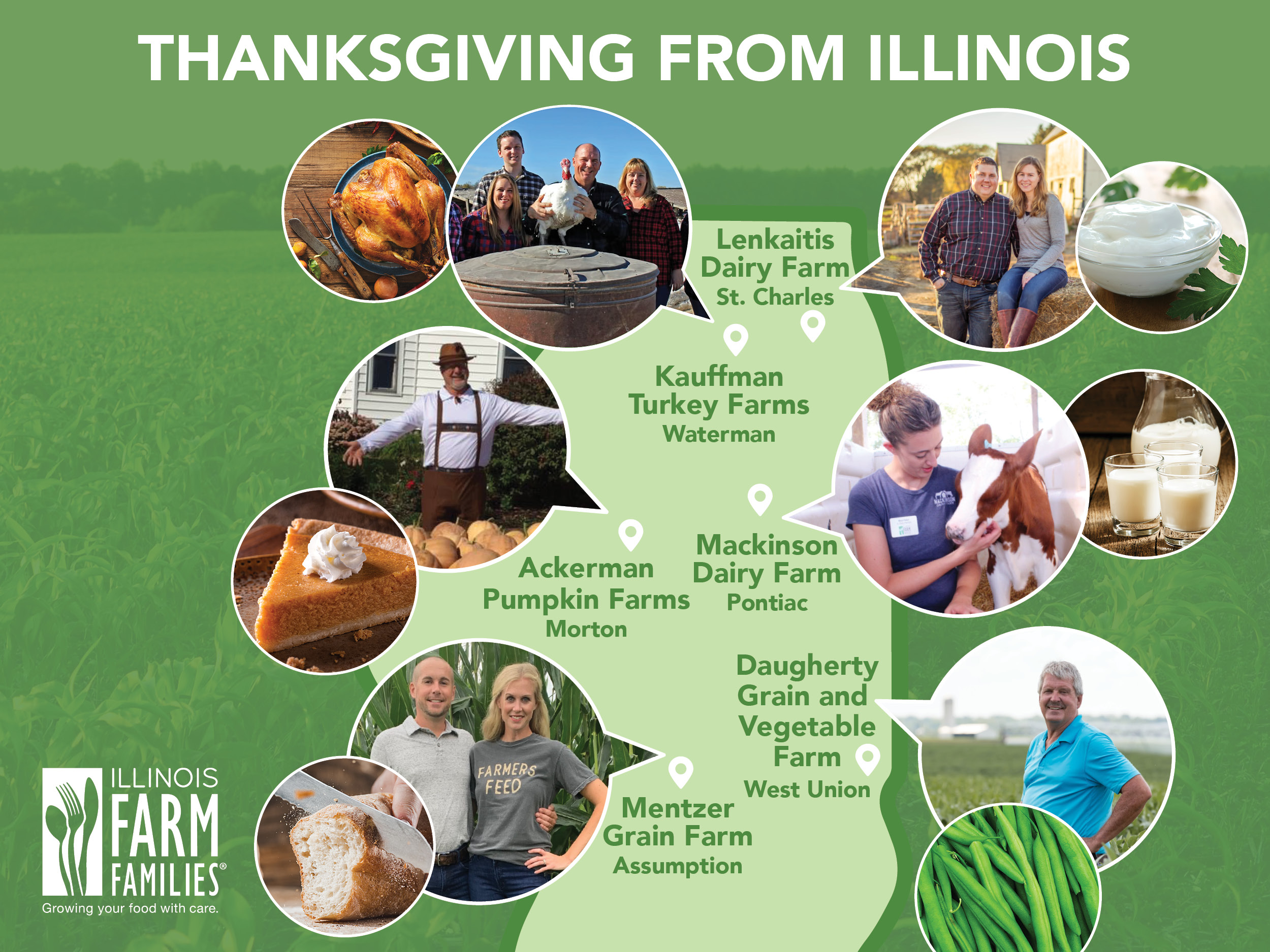 Often Thanksgiving’s main attraction, turkey is a protein that’s even gaining popularity outside of the holiday as the No. 4 protein choice for Americans. Illinois farmers produce close to 3 million turkeys a year. One of those is Kauffman Farms, a farm family that has raised turkeys for more than 75 years. The turkeys raised on their independent family farm are processed for their customers in their own federally inspected plant, just 60 miles west of Chicago. Two other staple Illinois crops play a role in how turkeys are raised. Turkeys raised for our tables are fed a balanced diet of corn and soybean meal, mixed with important vitamins and minerals. Got turkey leftovers? We highly recommend throwing them in any one of these seven Thanksgiving leftover meal ideas.

Whipped cream, cheese, butter or just good old-fashioned milk – no matter how dairy is used in your Thanksgiving foods, not much gets more local than this Illinois staple. Like Mackinson Dairy Farm that supplies milk, which arrives at the store within 48 hours of leaving the farm, or Lenkaitis Holsteins, a dairy farm literally in the Chicago suburbs whose milk goes to other favorites like sour cream. Check out this dairy-licious side dish for cheddar cornbread squares.

While corn and soybeans tend to be “king” in Illinois, the state ranks just outside the top 10 for our nation’s wheat production. Most Illinois wheat is grown in the southern part of the state – from about Springfield down – and Illinois farmers primarily grow soft red winter wheat. This is a variety typically destined for foods with fine particulate flour: biscuits, cereals, cakes, cookies, pretzels, and crackers, and is also part of all-purpose flour. Why grow wheat in Illinois? Illinois farmers like the Mentzers have added wheat to help diversify their crop rotation. This helps with pest problems, plus provides a nice ground cover over winter since red winter wheat is planted in the fall and harvested the following June or July. So whether you’re opting for store-bought biscuits or using all-purpose flour to make your own, Illinois wheat could have been involved!

Who can forget the green bean casserole when it comes to Thanksgiving foods? However you’re incorporating veggies into your menu, Illinois produce farmers have you covered. Like Brad Daugherty, who grows green beans that you can find under the Green Giant® label.

If you use a can of 100% pumpkin for any of your dishes, it likely comes from an Illinois farm. In fact, more than 90% of the nation’s canning pumpkins grow in Illinois – like on Ackerman Farms near Morton. Unlike pumpkins for carving, processing pumpkins appear pale orange and have a meatier, more palatable interior. These pumpkins are harvested in the fall, which means the farmers growing them are probably ready for a nice, warm meal seated at a table instead of in the field! Instead of baking the traditional pumpkin pies this year, mix things up with these pumpkin pie squares with cinnamon sugar yogurt topping.

Turkey, dairy, wheat, veggies, pumpkin – whatever your Thanksgiving spread looks like this year, know that Illinois farmers are growing food for your table with the utmost care and pride. And that’s definitely something worth being thankful for.