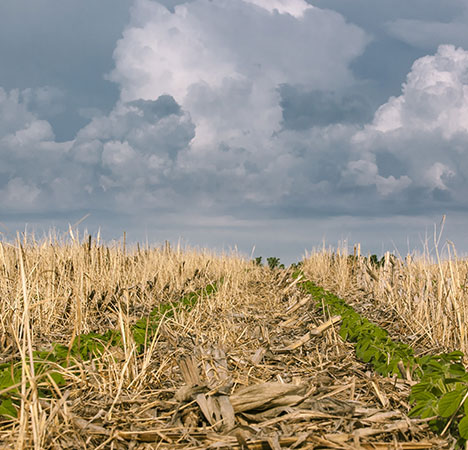 As harvest begins, we as farmers will spend a lot of time in our combines – and by extension, our phones. Sometimes that means managing other farm needs by phone, which gets me thinking.

It’s hard to imagine that after getting used to a pocket sized smartphone with highly sophisticated apps that you’d want go back to the days of the bag phone (for those who aren’t sure what I’m referencing, here you go). Sure, the bag phone met all our needs and did what it needed to at the height of its popularity, but I’ll stick to my Android, thanks.

Same goes for farming. As I begin my 33rd harvest season, I can’t help but reflect on how far this industry has come and the ways we’ve continuously improved what we do. We grow more with less, resulting in a significantly smaller carbon footprint. It’s hard to imagine farming without the precision of GPS, advanced data and analytics, and innovative seed trait technology.

All this evolution has made me think differently about how I treat my fields, too.

Roughly 75% of the land in Illinois is cropland. Traditionally, you might assume the Illinois growing season is one that’s bookended by planting in the spring and harvesting in the fall. On my farm, that’s not the case.

Once I’ve finished harvesting my corn and soybeans this month and next (hopefully), I’ll head back into my fields to plant cover crops.

Cover crops are crops that we plant in the fall and leave in the ground until planting the following spring. We won’t harvest these crops, but instead leave them in the field to protect the soil from wind and water erosion, and improve the soil’s fertility for the next growing season by adding valuable nutrients back into it. I also graze some of my livestock on cover crops during the winter months, which increases the benefits that my farm receives from cover crops.

You can think of it like a blanket for the soil.

Cereal rye, radishes and clover are popular cover crops because they get to work quick, establishing a nice ground cover over the winter months. On my farm, we plant cereal rye because it’s very forgiving as to when and how you plant it. I also raise and harvest my own cereal rye seed.

We’ve covered the “what” of cover crops. Now the “why” – specifically as it relates to my carbon footprint.

Plants convert CO2 into organic matter through photosynthesis, so grasslands, forestland – and cropland planted with cover crops – can help keep carbon in the soil instead of releasing it into the atmosphere. Fellow Illinois farmer Jeff Jarboe covers carbon storage more in depth here.

Our crops depend on nitrogen, a key nutrient for plant growth, which is why farmers will add nitrogen as fertilizer to their soils. Unfortunately, that nitrogen isn’t always taken up by the crop, and it can run off into rivers and lakes with heavy rainfall. Microbes in the water can then grab this nitrogen and produce nitrous oxide, another harmful greenhouse gas. Cover crops help prevent that from happening by trapping nitrogen before it leaves the field.

We’ve come a long way. As a farmer growing food, fuel and fiber for the world, I strive to keep learning and adapting to do what’s best for your family, my family, and the most important farming resource I have – my fields.

David Wessel raises soybeans, corn, wheat, cattle and hay on his 100% no-till farm in Chandlerville, Illinois. He and his wife Tama have two children.