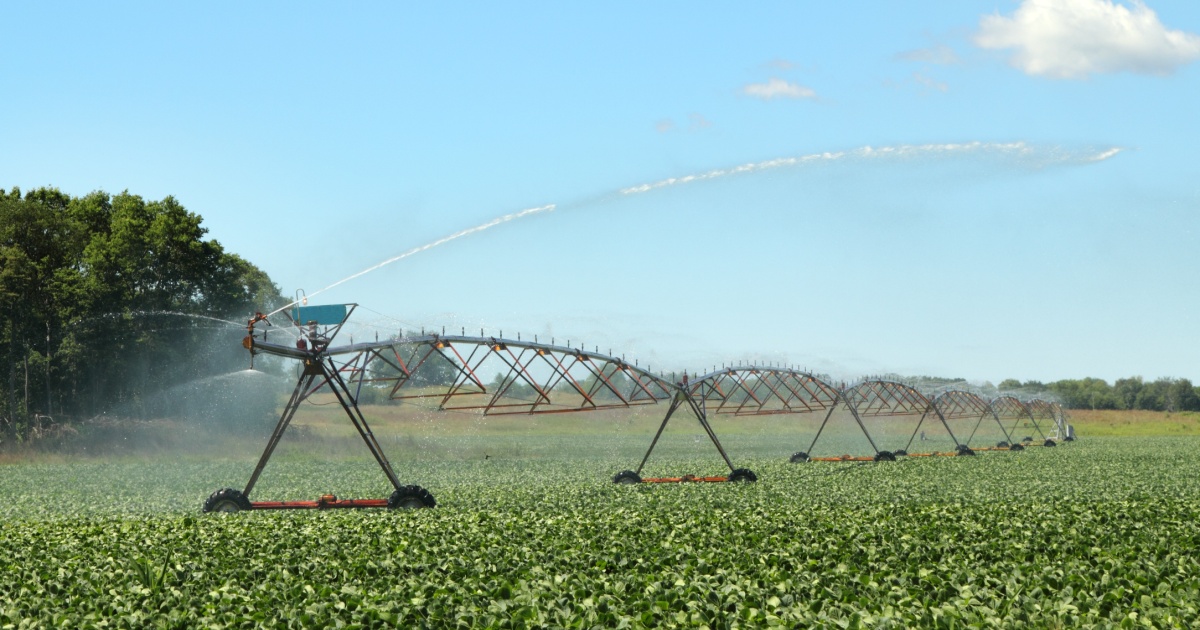 Crops are thirsty.  They use water to take in nutrients and facilitate processes to grow, flower and yield. And they are finicky. Each crop demands water at different stages. Too little water dries up yields. But too much water causes drowning or runoff.

While rainfall is unpredictable, irrigation quenches crop thirst as needed. And with water scarcity growing, all producers have a stake in water availability and quality issues.

Tim Scates farms with his family near Carmi, Illinois. They irrigate 35-40 percent of their soybean acres each year with technology that mimics perfect raindrops with varying nozzle sizes, water pressures and spray patterns. Water drops must be large enough not to evaporate, but small and slow enough to not compact the soil. He uses calculations from solar-powered soil moisture probes to decide when and how much to irrigate for maximum return on investment.

“We have to manage irrigation water use and the quality of water leaving our fields,” he says. “We don’t want to waste any water – or the energy it takes to pump it.”

Agricultural water use has become a complex issue around the world. But innovative thinking is providing tools and resources that will help producers like Scates continuously improve water efficiency to protect natural resources and profitability.

“Water is the main input needed for crop production,” he says. “Final yield is directly related to the amount of water available during the growing season. Today, most producers irrigate with a ‘crop per drop’ mindset, focusing on maximizing yields. We focus on costs, including pumping and profitable fertilizer use and yield potential of each irrigation to find the most profitable strategy for each field and crop for more ‘profit per drop.’”

“Irrigation efficiency will become critical as water becomes increasingly limited,” says English. “As the value of water increases, producers will move toward that ‘profit per drop’ mindset. And that will demand more precise irrigation management with a more accurate picture of what water is doing in the field. That is not as easy as it sounds, but the software helps.”

He expects some regions will eventually incentivize irrigation efficiency similar to water markets like the Murray-Darling Basin in Australia. But managing for optimum profit makes sense regardless. Producers can use field data to track crop input costs, including water and irrigation energy, against yield and crop price, to figure out the best support for existing water.

“Irrigation is harder than it looks,” says Charles Hillyer, chief technology officer for Irrigation for the Future. Prior to joining English, he spent time as an Extension specialist at Texas A&M. “Accurate information is critical to deciding when and how much water to provide.

“For example, weather stations can measure evapotranspiration, or how much water the crop is using,” he explains. “Soil moisture sensors detect water availability. And crop sensors and imaging show crop stress, or how the crop feels about it.”

He describes scientific irrigation scheduling as using measurements gathered through such tools to make irrigation scheduling decisions. Irrigation for the Future’s model uses soil and air data to calculate irrigation strategies for yield and profit efficiency based on water use and availability. But Hillyer believes the future is in incorporating crop stress data, as well.

“Data-driven management will distill all available data into meaningful information that identifies efficient water use,” he says. “Robust accounting for crop stress in current models is difficult, but figuring that out will be a significant step in improving irrigation management and our ability to optimize water use and yield for profitability.”

Hillyer and English described several emerging technologies that can have applications for water use efficiency. For example, COSMOS ray technology and actively heated fiber optics can be used to measure water availability over large areas. Infrared satellite imaging and similar tools provide new ways to look at crop stress on a large scale. And artificial intelligence may be able to integrate data streams, including crop stress, to support data-driven management.

“These tools show promise, though some are not currently affordable,” Hillyer says. “But given increasing water scarcity, we must explore options like these.”

Chemistry Captures Water to Maximize Use

Other innovations work toward the goal of holding water in the soil. “Most irrigation management efforts focus on the mechanical, but chemistry is another tool in the toolbox for water management,” says Don Spier, irritation water optimizers business manager for Precision Laboratories. The specialty chemistry company develops surfactants and adjuvants for agriculture and turfgrass that improve soil water-holding capacity for 30-45 days.

Spier says irrigation chemistries allow growers to use less water and energy while increasing crop yields. “Water optimization chemistries improve the interaction between water and soil to reduce barriers to efficient use,” he says, describing two types
of technology.

Infiltration chemistries reduce the surface tension of water so that it spreads better in the soil for more uniform distribution. Hydration chemistries maintain available moisture in the plant root zone to keep it where plants can use it. Both technologies use molecules with two distinct parts. One part anchors to soil elements or organic matter, while the other part attaches to water.

According to Spier, research demonstrates the value of these chemistries. A corn study found that with the addition of an irrigation water optimizer, a trial pivot used 20 percent less water and saw a two percent yield increase compared to the control pivot that received full water, and an eight percent increase compared to a pivot that received 20 percent less water with no optimizer. At the same time, the optimizers saved about 20 percent in water and energy costs.

“Research partners in various crops also observed more effective nutrient use,” he adds. “They have seen better performance from herbicides and other crop protection products and less runoff on slopes. Ongoing research will help us quantify these benefits in various crops and conditions.”

And ongoing innovations like these will position producers to effectively manage water use and quality under changing conditions. While Spier recommends applying water optimizers through irrigation systems, labels do allow pre-plant
broadcast application.

“In the future, granular formulations may work for field crops without irrigation,” he says. “As water becomes more regulated, we believe water optimization chemistries will help farmers.”

Learn more about farming and technology at ilsoy.org.