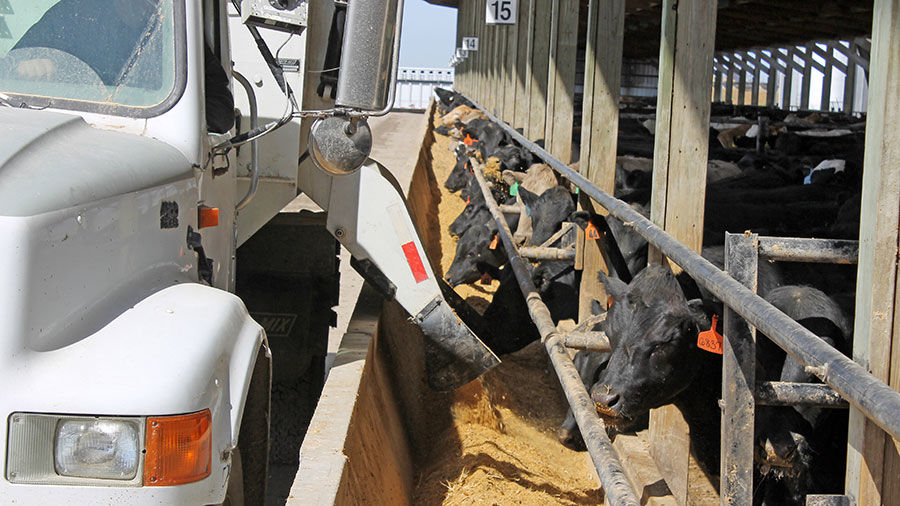 When Al Lyman and his soon-to-be bride were Iowa State University students in the 1980s, his future father-in-law was adapting innovative crop and livestock practices at Hadley farms in Henry County in northwestern Illinois.

Now that Warren Hadley has retired, Al and his wife, Karen, the fifth generation on Hadley Farms, carry on that tradition using new technology to efficiently feed their cattle. They also use popular conservation cropping practices, including cover crops, on the 700 acres they now farm.

Before farming, Al worked with cattle and Karen with the conservation service in Iowa and Illinois. When the timing was right, they moved to Cambridge and helped the 150-year-old family farm — which had been a dairy farm at one time — to become the modern feedlot and corn operation it is today.

Al Lyman’s new iPad runs a scale app to monitor the ingredients to be loaded into the feed truck. The tool is the most recent addition to Hadley Farms feeding system.

On a brisk April morning, Al used an iPad as a central part of feeding the approximately 1,200 feeder cattle on the farm. The software program works in conjunction with scales on the mixer truck and calculations made for the right nutrition.

The ingredients for the recipes are collected with a loader and dumped into the mixer truck, which is also equipped with compatible software. Across the yard, cattle wait in a large monoslope barn built in 2014 and an older barn built by Hadley in the 1970s.

On this spring day, Ryan Nelson loaded the prescribed amounts of high-moisture corn, the “wet” distillers byproduct from nearby ethanol plants, and corn stalks baled by the Lymans’ son, Justin, as an FFA project enterprise. They supplement with pellets recommended by the team’s nutrition consultants.

Every feed ingredient is chosen for a reason.

“We work with nutritionists who analyze our feedstuffs,” Al said.

The rations can be changed if there are different feedstuffs available.

“They have it all down to a science,” Al said.

“It really speeds things up. For Karen, it’s almost in real time for billing,” he said.

Karen is in charge of the data for the farm, which includes billing for cattle that are custom fed, paying the bills and record keeping, which ranges from financial information to managing the GPS mapping data for fertilizing, planting and harvest.

So far the investment in the feeding system has been worthwhile, with each of the three new iPads costing between $300 and $600. They pay a monthly fee for the software to United Animal Health and invested about $1,000 for each Bluetooth reader for a system that is compatible with the mixer truck and the other tools they are already using.

“Twenty years ago, we used to write down what we fed, now the scale and the computer records it precisely,” Al said.

Feeding about 1,200 head takes two people about two hours a day, he said. Usually the feeder cattle are on the farm 120 to 150 days depending on their size.

He said his father-in-law was an early adopter of various by-products from ethanol and corn syrup for cattle feed. He even had a mixer wagon and scale in the 1960s.

”He taught me how to feed cattle,” said Al, who is originally from Belle Plaine in eastern Iowa.

Over the years, the facilities and buildings on the property have changed along with the technology. When the monoslope barn was built in 2014, the bunker was enlarged to store more high-moisture corn and other feed ingredients.

The family uses a measured system in all the farm management. The liquid manure is carefully knifed into the soil as needed according to a soil test.

“We use a lot less (commercial) nitrogen, and the corn yields have been better than ever before,” Al said. ““We haven’t needed commercial P or K on our home farm for 40 years.”

Al estimates that with their system today, they save about 100 units of nitrogen per acre compared to former practices.

Al said that Hadley acknowledged the importance of manure placement for fertilizer when yield monitors showed poorer yields were in areas that received less manure. Hadley started to spread manure in the far fields where nutrients were low and worked his way up to the fields nearer the barns where yields were often higher.

The grain and cattle farm work together. They feed most of the corn they grow. Justin, a high school junior, bales cornstalks, manure goes back on the fields where the cornstalks have been removed, and the cycle continues.

Eyes to the future

Al likes the idea that some of the sustainable practices that are popular now are things they’ve been doing for a long time.

“There are so many things involved in keeping a family farm sustainable for future generations,” Karen said. “Feeding cattle adds to our crop production. We continue to invest and work to grow our farm so that the future generation has the opportunity to continue farming.”

One of their daughters and her family live in O’Fallon, Ill.; their other daughter and her family work closely with the cattle operation and live nearby; and Justin plans to pursue a degree after high school then return to the farm.

“If we aren’t there, people can make decisions about things that can directly affect us,” Al said of the importance of taking time to be involved in the non-farming aspects of agriculture.