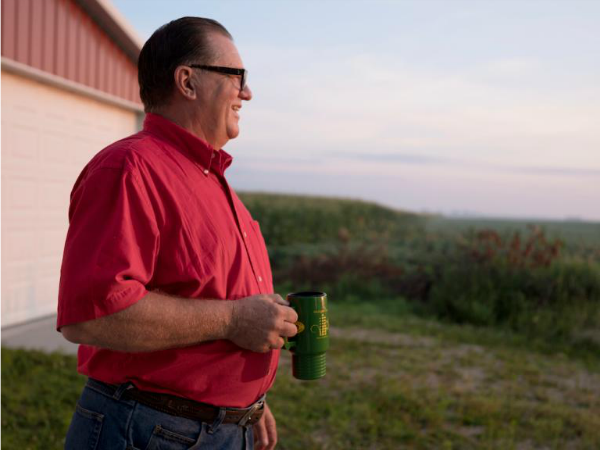 EARMARKED FOR CARS AND CUPS

Friendly and low-key, Paul Taylor is abundantly proud of the way he grows corn, and he wants you to be proud of it too. He knows that the decisions he makes go far beyond the farm. His choices end up on shelves at the store, in pumps at the gas station, and even in the carpet underfoot. Corn has plenty of uses from table to tank and beyond.

Taylor started growing corn when he was four years old. He planted a little patch in the yard in northern Illinois where his family has owned a farm for nearly 100 years. Now at age 65, he is still committed to corn. He and his wife, Barbara, have a little extra time now for traveling in their new camper with their poodle, and creating art in a hog-barn-turned studio. But they’ll always be a farm couple. Taylor’s story is the story of Midwestern corn farming and its real world benefits to the economy, rural jobs and environment.

Taylor speaks with the earned wisdom that comes from decades of working the soil, as well as from a lifetime of study and thought. He cites the use of biofuels as one of the greatest benefits of corn, especially on local economies. The conversion of field corn into fuel and other goods such as bioplastics, has resulted in an environmentally responsible relationship between industry and community. “I always think of sustainability as a three-legged stool,” Taylor says. “Economic, environmental, and social.”

Ethanol has perhaps done the most to support those three legs. “We use biofuels on the farm,” Taylor says. “We put it in our cars and our pickup trucks. It gives us clean air, and it helps reduce our emissions.” He points out the nearby city of Chicago as an example of how the use of biofuels has helped with air quality in the past 25 years.

More recently, the ethanol boom — which has supported a greenhouse gas emissions reduction equivalent to removing 9.3 million cars from the road — has done a lot, says Taylor, to bring young farmers back to the farm. In addition to ethanol, abundant corn has helped make everyday items safer and more sustainable.

Society’s focus on petroleum for fuel and other products has, in Taylor’s view, unfairly drawn focus away from homegrown, locally produced, renewable corn. “The reality is that just about anything petroleum can be refined into, corn can be.” Corn is being used by today’s innovators to create more sustainable products – from construction materials to medical supplies. Increasingly it’s also a petrochemical substitute in tires, sneakers, cups, cutlery, bags and more. Taylor has even had lap throws and a polo shirt made from cornstarch; the shirt wore well, he reports.

Bioplastics have become widely used in containers and food packaging – even Taylor’s trusted morning coffee cup — and they have the advantage of being biodegradable without releasing toxic substances. It takes less energy to produce bioplastics than petroleum-based plastics and they contain no toxins.

Taylor admits that there are other important elements of sustainability besides the land, including water and relative energy costs. “I fully understand that,” he says. “Nobody thought they needed an iPhone before Apple told them they did. What I tell my friends is, ‘Do your best and encourage people, think outside the box, think about the value of corn production for our local communities, how it puts money in our school systems, and so on. That’s part of the sustainability too.”

With downsizing over the years, Taylor now farms about 800 acres. He has a son who works in the seed industry, another son in construction, and a daughter in the food industry. He and his wife hope that even if the children aren’t farmers, they’ll at least retain ownership of the farm and thus keep the family tradition alive. “I’m proud of what we do,” Taylor says, “I think we’re good members of the community.” And corn has played a key role: “It’s adapted well to the soils and to the climate, and it’s been a consistent crop for more than 150 years.”

America’s corn farmers, like Taylor, are committed to sustainable and innovative uses of corn for a better future, both for the environment and their families and communities. 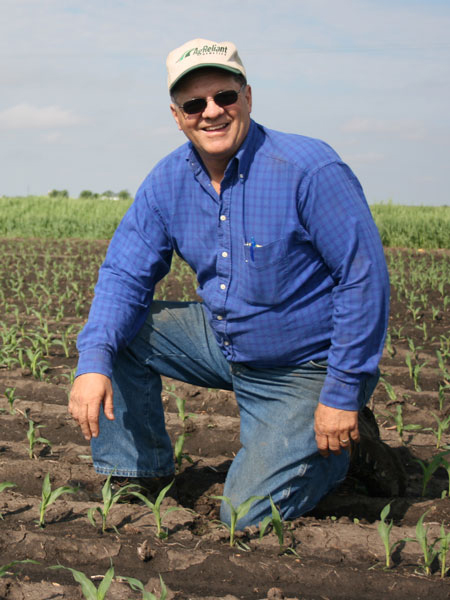 I am a third-generation northern Illinois farmer. I grow non-GMO sweet corn and vegetables for Del Monte, as well as both conventional and non-GMO field corn and soybeans. When you open a can of Del Monte corn, you might be eating food grown on my farm!