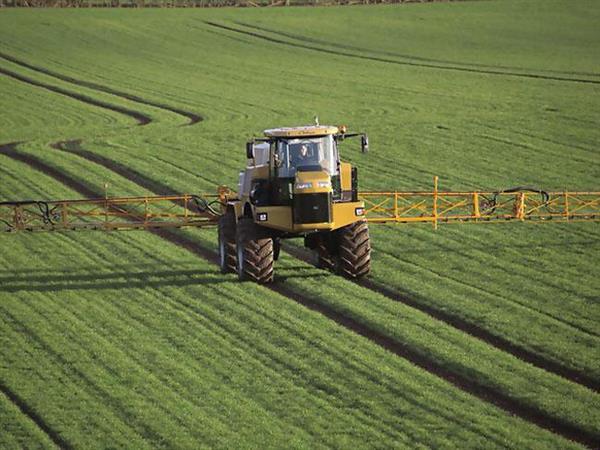 Is conventional food “drenched in chemicals”?

Now let’s take that idea and apply it to agriculture. Below is a picture of a rogator. This is a common piece of equipment used to spray crops to control weeds. Similar to a garden, everyone knows you must control weeds or they’ll take over and you’ll lose your crop. The only difference is, the farm I’m involved with has 2,000 acres. Would you like to come over and weed 2,000 acres by hand? I didn’t think so.

Enter glyphosate. Also known as Roundup, it is a very popular herbicide used in millions of gardens around the world to control weeds. On a farm, this is done on a large scale but the minimal amount actually used may shock you. For example…. our rogator holds 750 gallons. Of that, only 7.5 gallons is glyphosate and the rest is water. Really! Water! It equates to .2 gallons per acre. That’s like 1/5th of a gallon over the area of an ENTIRE FOOTBALL FIELD!

Let me repeat that.

Out of 750 gallons of crop spray, only 7.5 gallons is actually glyphosate. The rest is WATER. So…..for every part of a scary-sounding chemical, there is approx. 100 parts water. That’s it. A fifth of a gallon over an entire football field.

Now. Do you see the height of the rogator boom? That’s the long part where the spray comes out of which allows farmers to spray multiple rows at once. As you can see, it’s kinda short. no corn or soybean crops are present. That’s because the glyphosate never actually touches the grain itself. Actually, thanks to modern Ag technology, chemical usage has been SUBSTANTIALLY reduced. Farmers only go over crops an average of 2 times, in the beginning of the growing season. Is this starting to make more sense and sound less scary now?

Now let’s talk organic. I know it’s a sensitive subject and I hate to break it to you, but if you’re buying organic thinking they don’t use chemicals, you may be expensively misled through marketing tactics. Organic farming methods often times still use non-synthetic chemicals and sometimes will reapply up to 6 or 7 times. Does that mean there’s anything wrong with what they do? Absolutely not! I respect everyone’s personal decisions to consume whatever you like. (I’m here to educate, not sell you something.) All farmers deserve respect and bust their butts everyday, no matter which method they choose. I am, however, tired of certain organizations out there who sure are good at marketing and make it sound like certain crops are “drenched” in chemicals, which is 100% false. And that’s what this post is all about. Sorry. I hope you haven’t been lied to by one of these hate groups, used to boost sales in a growing 40+ billion dollar industry seeking more profits. I know this is a sensitive topic for people who only want the best for their health and their families, and that’s important, but I urge you to learn the facts from farmers and not a source who has never actually worked in agriculture. Just my two cents.

I’d like to thank the general public in advance for believing in and respecting the modern farmer. In my opinion, it’s kinda like being in the military. Both industries can be extremely dangerous, yet still get a ton of respect by the general public….and that’s important. Don’t bite the hand that feeds you, or protects you. Even if you don’t like the political BS involved, a good ol fashioned “thank you for your service” goes a long way.

Thank you for your time in reading this. I know it was a long post, but it’s important to know that today’s agriculture isn’t scary. Obviously there are many, many different ways that crops can be grown and this is just one example, but I’m proud of what we do! I hope you learned something today and will share this with other people you know. Not because I get a financial kickback. Not because I’m in bed with a big Ag company. Not because I’m trying to sell a product or a book. But purely on the passion that lies within me to educate consumers. Promoting the truth. And bridging the gap between farmers and consumers. ‘MERICA.

Thank you to all who support me in this journey.

Michelle, the farm babe, grew up involved in 4-h, horse riding and doing chores on her friends’ grandparents farms, but when her high school aptitude tests told her to go into farming, she ignored them and headed west for college and a career in fashion. After working for Gucci On Rodeo Drive in Beverly Hills and spending a number of years in downtown Chicago, she bought into organic, grass-fed, “Monsanto is the devil” food idealism. At this point she caught the travel bug and moved to Florida, where she was able to have a flexible schedule as a ‘globetrotting bartender’ to finish up her goal of visiting all 7 continents, (56 countries.) she then met her “Prince Farming.” In the year she has been living and working on his Iowa farm, she has learned the truths of modern agriculture firsthand and enjoys educating the public and debunking the popular myths she once believed in. Together, she works alongside him and his family on nearly 2,000 acres of corn, soybeans, alfalfa and cattle. She’s happier than she’s ever been to get back to her “roots” of being involved with animals and farming and has gone from being skeptical about food to to sharing her passion of modern agriculture! She’s literally gone from Rodeo to the Rodeo, and wouldn’t have it any other way.